I had forgotten how dead Clerkenwell is on a Sunday but as I strolled down from Angel in the sunshine, I couldn’t help but feel relaxed on the Sunday morning I visited Granger & Co.

When three friends and I tried out its newest branch at 1.30pm it was probably one of the buzziest places in the neighbourhood – although obviously that wasn’t hard!

The room is bright and airy with huge windows overlooking the churchyard opposite and tables a nice distance apart.

The breakfast menu is only served until 12pm but it was great to see that some of the much-Instagrammed dishes like the ricotta hotcakes and full Aussie are also included on the lunch (12-5pm) menu.

The drinks menu has loads of lovely summery temptations. Two of us went for the homemade lemonade due to Sunday hangovers and another chose the ginseng and elderflower spritz.

When it came to the food I chose the sweetcorn fritters with roast tomato, spinach and crispy bacon with a side of avocado salsa.

It was a really good sized plate of food considering, at £13.50, I found it quite expensive for a brunch-style dish.

The fritters were a good balance of batter and sweetcorn but my main gripe would probably be that the rest of the ingredients were not that hot. The cold bacon was a bit of a turn-off. I also think the dish could have done with some sauce, perhaps something with some chilli.

I could have asked for some I suppose…

Two of my friends opted for the courgette fritters, which were my back-up choice.

They came with a deep fried egg, halloumi, tahini yoghurt and parsley salad. Anything with halloumi is right up there for me.

This was again a bit plate of food with lots of vibrant colours. Although the fritters themselves were definitely not as attractive to look at as the sweetcorn ones. 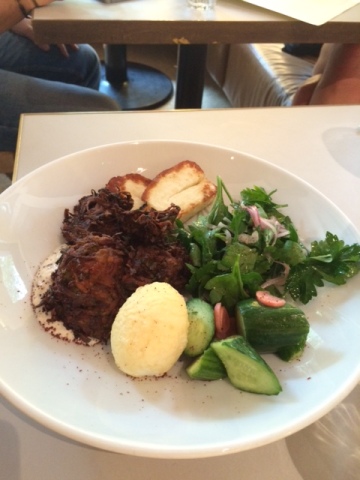 I think we were also expecting the deep fried egg to look less like an egg. It could definitely have been crispier.

My other friend chose the ginger cured prawn & spring onion egg white omelette, spiced salsa rossa. This was actually wasn’t a very attractive dish and didn’t really give an indication of the unique flavours inside.

I know it’s hard to make an omelette look sexy on a plate but this dish just didn’t really do it for us.

It also seemed to me a little like salad was used for the second two dishes to make up for the empty space on the plates and something more interesting could have been added to the dishes.

Granger & Co was a great place to try and it was nice to travel out of Tooting on a Sunday for once but unlike Caravan and Modern Pantry, I just don’t think this place was exciting enough for me.