Before I went to Flesh and Buns I don’t think I appreciated how many different types of food Japanese cuisine is made up of.

Many people associate the country with sushi or ramen so these funky little Japanese sandwiches were a revelation to me.

Flesh and Buns scored points with me before we even arrived because they take reservations. Yes, it’s a restaurant in Covent Garden where you won’t see people queuing out the door in the wind, rain and snow!

I arrived before my friend Emily early on a Wednesday which gave me a chance to do a little spying on what we’d actually be eating.

I soon deduced that the ‘flesh’ and ‘buns’ involved putting meat, sauce and pickled vegetables inside steamed buns.

While we decided what we wanted to put in these fluffy, smiley parcels, we both ordered the non-alcoholic Elderflower Fizz cocktail which was deliciously cool and refreshing.

There is an extensive sake and cocktail list which I’d like to explore when I don’t have to get up at 5.40am the next day!

The menu is a mixture of sushi and the flesh and buns and, as with other Japanese restaurants, it’s not cheap.

The food just comes out when it’s ready and on this occasion it basically all arrived at once, so we didn’t know where to start.

Not wanting the flesh to get cold we started with the salmon which, while it may have looked like an S-shaped burnt bit of fish, actually tasted delicious. The fish was moist and juicy and the crispy burnt skin was stunning.

We stuffed the cloud cushions (that’s what I’m calling the buns now!) with the fish and the pickled cucumber and drizzled the teriyaki sauce over the top.

The balance of textures is just perfect with the crunchy sourness of the cucumber mixed with the sweetness of the fish.

The piglet belly was a very generously-sized portion which was a relief because was quite pricey at £14.50.

Again the meat was tender and soft with a crispy skin which complimented the doughy softness of the buns. This dish came with pickled apple which again added some bite and bitterness. 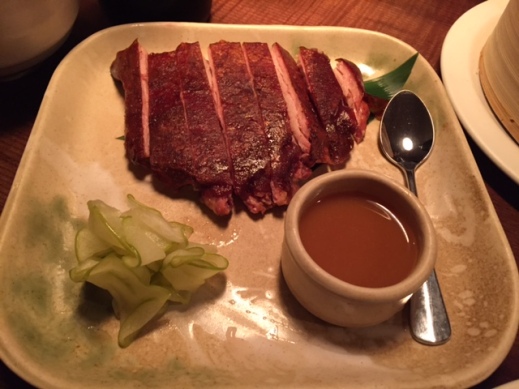 On hindsight we probably didn’t need the sushi as it was overlooked in favour of the cloud cushions and they were actually filling enough on their own. We probably could have swapped it for two more buns to put the remaining meat into.

I’m booked (yay!) to go back to F&B with some other friends next month and I’m not embarrassed to say that I’ve already decided what I’ll be trying then!