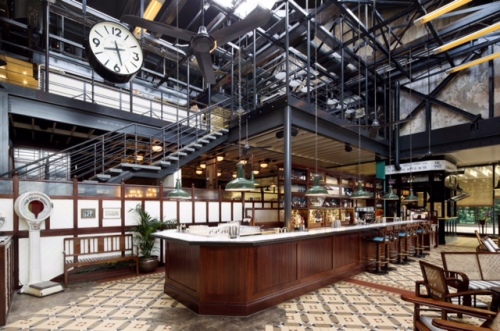 Dishoom is not just one of the most talked about restaurants at the moment but must also be mentioned for its stunning King’s Cross branch.

I’ve talked a lot about my never-ending list of places to go and Dishoom was pretty much at the top. Especially as my husband kept making me jealous by going for work breakfasts there!

I was lucky enough to go with 10 friends when our best friend was back from Australia for a while.

The restaurant is just around the corner from Granary Square which has been transformed in the past few years and now has a range of go-to eateries like Grain Store and Caravan.

The building’s past uses have been a railway transit shed and Irani cafe which used to serve the railwaymen and office workers in the area and it has kept much of its charm and character. 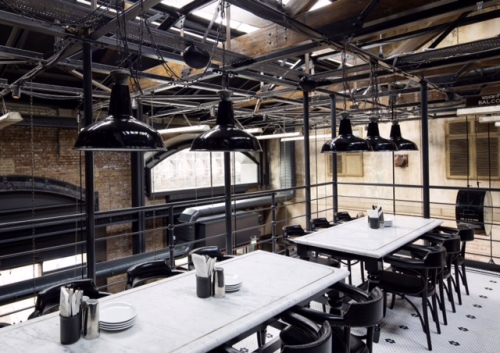 I think we all knew from the outset that we were going to order loads of food and the waiter even gave us a pencil so we could just mark everything we fancied! This was a dangerous move…

We ordered a range of starters to share and I can’t think of one which wasn’t excellent. The okra fries were as moreish as potato fries which is often not the case with this vegetable. The calamari and prawn koliwada were also full of flavour with a delicate crunch which didn’t detract from the fish.

The house black daal was something that I had heard was on its way to becoming the stuff of legend so we had to try that.

Perhaps not the most attractive of dishes, but it was certainly worth trying. It tasted much creamier and richer than regular daal and the darkness brought a smokey flavour with it.

Then it was on to the grilled dishes and curries. I think the standout dish here was the murgh malai chicken thigh meat. The meat was tender and infused with garlic and coriander.

But it seems unfair to choose just one particular dish when our plates were piled high with food and it was all gorgeous.

The gunpowder potatoes definitely lived up to their name with a smokey flavour but with a bit of fizz and bite.

The mattar paneer was really memorable. I don’t ever order paneer dishes but with this one I forgot I was eating cheese – the flavours were so good.

We ate all of these dishes, and more, topped off with some excellent naans and then, unusually, a coleslaw. The Dishoom slaw gave a cool, crunchy balance to all of the other dishes and was unlike any other coleslaw I’ve tried.

I think you can tell that Dishoom King’s Cross was a resounding success. I guess I just need to convince the owners to bring a branch down south to Tooting now!

:: Thanks to Dishoom for the photos. As you can see I didn’t take many, apart from that terrible cheese on toast one!