Honey & Co is a teeny, tiny restaurant on Warren Street which opened two years ago and has been packing people in since.

It is run by an Israeli husband and wife team and focuses on dishes from the Middle East.

Getting a table at this place, even on a Tuesday night, proved to be quite a struggle and we soon realised why when we arrived.

It can probably only fit a maximum of 25 people inside with tables arranged so closely together, it’s a wonder the waitresses can squeeze between them.

Though the menu is small, it is so varied that it took us a while to decide what to have. The starters were all vegetarian, with the exception of the taramasalata.

My friend and I opted to share the cinnamon spiced falafel, the taramasalata and a side of three types of bread. 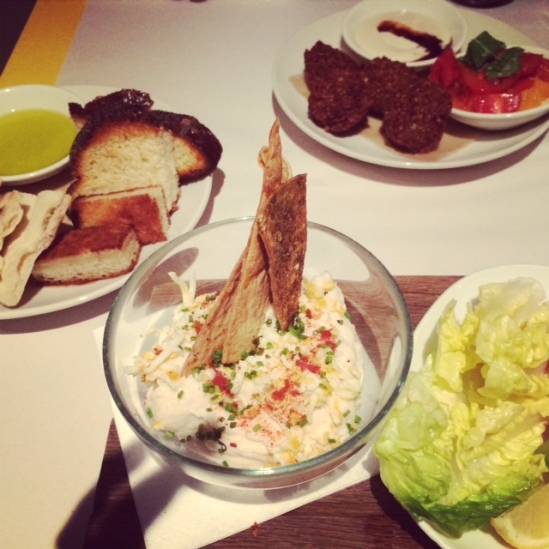 The taramasalata came with grated egg and a crisp bread for dipping. It was lovely and creamy and we ended up dunking whatever we could find into it; falafels, pitta, potato bread, radishes…the list goes on.

My only complaint, and I know some people have a real aversion to taramasalata, but I felt it could have been a bit fishier.

The falafel were really delicious – crunchy on the outside but smooth and full of flavour on the inside. We alternated dipping them in the tahini or taramasalata (need to find a short way of writing that word – TRM maybe?) or eating them with the colourful tomato, chilli and orange salad.

We found it much harder to decide on our main courses. My friend, who is 15 weeks pregnant, had a craving for rice so opted for the slow cooked lamb with saffron rice, almonds and raisins.

I have to say, after our beautiful, vibrant starters the colour of this dish was less appealing. However, I was informed that the lamb was soft and tender and the rice eased her craving perfectly.

I chose the slow cooked chicken cooked with pomegranate in a flatbread with a pomegranate and parsley salad. The parcel was huge with chicken bursting out of it. 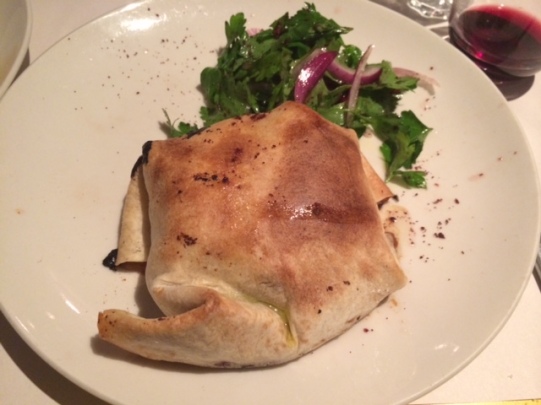 The chicken was really well cooked with just the right balance of fruitiness. I’m not great at mixing sweet and savoury foods usually but this was just right for me.

The salad on the side was a little uninspiring to be honest and could definitely have been more substantial.

Our table was right next to the bar area where a range of delicious looking cakes were on display so we thought it would be wise to sample one of these too, just to finish off the night properly. 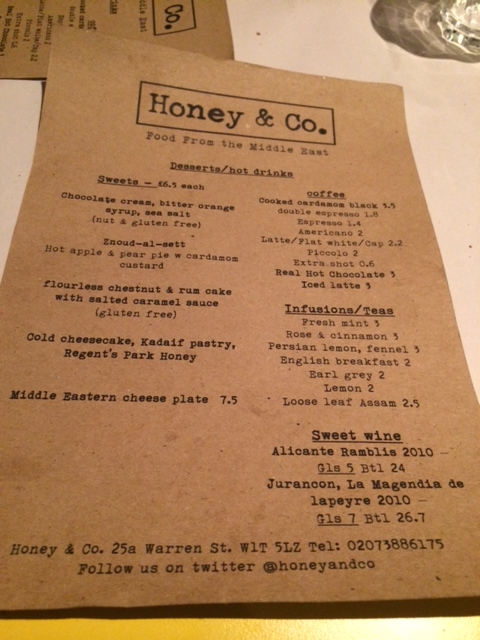 Earlier in the evening we had been asked to squidge even more to make space for a couple whose reservation I think had been misplaced.

It meant we really could hear every word the other pair were saying to each other and were almost touching elbows.

The waitresses were very apologetic and sweet about asking us to move and as a thank you rewarded us with a beautiful cake served on a ceramic tile.

It was flavoured with rose and had a lovely jam hidden inside the dense sponge. 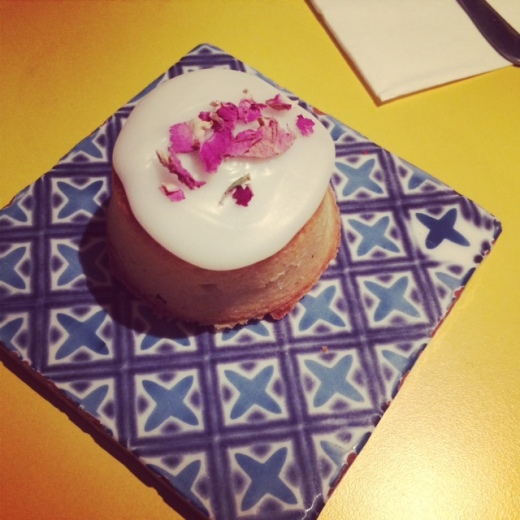 So we demolished that. And then managed to consume the flourless chesnut and rum cake with salted caramel sauce as well.

This was a lot softer than the other cake and with the hot sauce it just fell apart as we put our spoons through it.

I didn’t feel like I could taste the rum enough in the cake but it was great when the salt hit at the end of a mouthful.

Both of the cakes were the perfect size for sharing and we really couldn’t manage another mouthful after we’d finished. 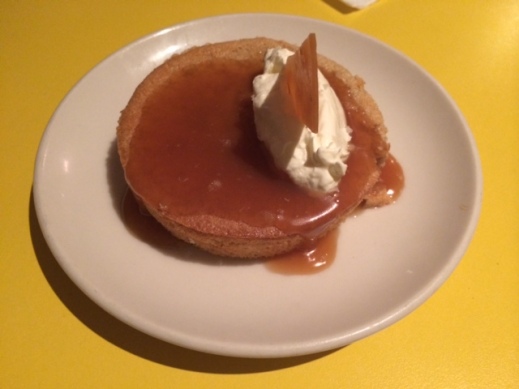 I am so glad we managed to squeeze in to Honey & Co and sample what it has to offer. I had heard so much about it and lots of people have been raving about their cookbook.

The food was excellent, the portion size great and service was personal and attentive.

Our main gripe would be that packing people in so closely does affect the dining experience a little bit. Breathing in as you edge between tables on the way out is difficult when you’ve just eaten three courses!

But this couple know they are on to a winner so I don’t blame them for wanting to please as many people as they can.