We did it! We got a table at Chiltern Firehouse! It took a bit of wrangling and a few terse emails regarding their non-existent booking policy but on Saturday we finally ate there.

This Marylebone restaurant has been hyped up more than any other I can recall recently. It has had a steady stream of celebrities, politicians and D-listers through its front doors since it opened.

We are none of those obviously but wanted to give it a try to see what all the fuss is about, and to see whether they do actually serve food. Why? Because the food is not something I had heard mentioned at all.

We were there for lunch and it was packed out, obvs!

We started with a drink in the bar, which is tiny. I can imagine on a busy evening this would be a bit of a crush. In fact the whole place is like that.

The tables are really crammed together in the dining room with barely any space between them. Could that be what led to Kate Moss and Lindsay Lohan having a bit of a barney?

It was my mum’s birthday and we were all in a bit of a celebratory mood so we made the decision to order a lot. I’m sure the dinner menu is different but the lunch menu was quite short so we managed to cover a lot of ground!

I had heard about the crab doughnuts so we ordered two portions of these. They were soft and sweet with a lovely balance of fish and dough. I’ve heard of a ‘cronut’ – would these be a ‘crAnut’? Who knows… but I’d eat them again! 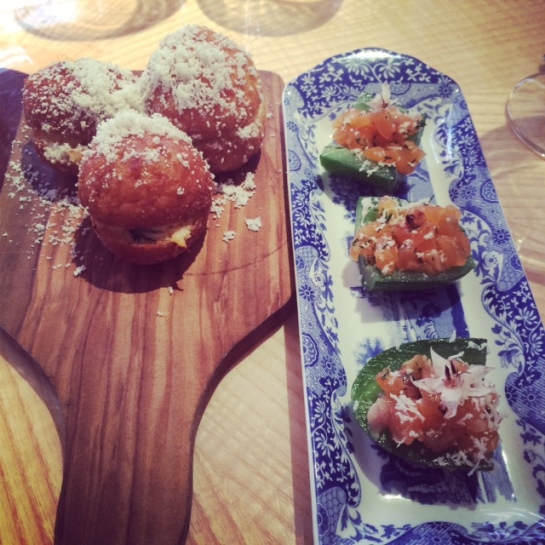 Matt had the ‘famous’ Chiltern Caesar Salad for his starter which had crispy chicken skin instead of grilled chicken breast. It had a strong but delicious flavour.

My sea bream crudo was really tender and full of flavour with small popping balls of caviar on the top.

My mum’s heritage tomatoes with burrata and basil was beautifully presented but I thought a bit lacking on the tomato-front.

My brother thought his steak tartare with crisp bread and an egg yolk beat all of our starters. 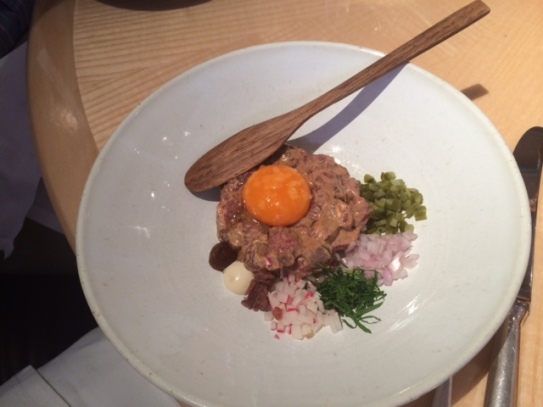 The starters were all original, delicately presented and really tasty.

It was the next course which let things down for us I think.

My lobster noodles were more like a chow mein, with so much salt that the flavour of the lobster was a bit lost.

The deconstructed crab omelette was like nothing I’ve seen before. Presented in a hot pan it looked interesting but I think it was lacking in crab and not quite what Matt and my Dad thought they would get.  They both felt the need to add some fries to their meal to pad it out which is always an obvious indicator of how good a dish is I think.

The desserts brought the standard back up again and once again we managed to order a good range of them. The chocolate torte with hazelnut ice cream was delicious – very rich and creamy. I had the raspberries with mint ice and chocolate crumbles – I know I haven’t described that very well but it was really refreshing with a good mix of temperatures and textures.

Matt and my brother ordered a deconstructed (again!) strawberry cheesecake dish which, while not necessarily original, was really summery and a light choice for lunch.

We were impressed with Chiltern Firehouse and Andre Balazs’ menu but there were a few elements which let things down for us a bit. The food arrived without us having any drinks on the table.

But the service was really friendly, in a cool, standoffish way, and the atmosphere in the restaurant is really lively.

But next time I want the table with the fireman’s pole in the middle of it!

NB: The day after we dined at Chiltern Firehouse an article ran in the national newspapers saying the restaurant had attained just two out of five stars in a health and safety inspection. Obviously I didn’t see the kitchens but let’s hope they sort this out as soon as possible. It is unacceptable for anywhere not to have its hygiene standards up to scratch.

One thought on “Chiltern Firehouse – tasty but not special enough for the hype!”