I have always wanted to attempt a beef Wellington but felt like it wasn’t something to try on friends because of the strong likelihood of it going embarrassingly wrong.

I have heard ‘horror’ stories of soggy bottoms and oozy juices, so the decision to try to cook it for New Year’s Eve was made with a high level of trepidation.

But what did it look like inside? Find out below….

After a month of eating and drinking, Matt and I decided to run away to Dorset for a few days to have a bit of a detox and spend time walking, cooking and generally hibernating.

We decided a while ago to try the beef and planned to do a scallop dish for a starter. A lack of scallops in Bridport and surrounding areas meant we chose lobster tails instead which we had never cooked before either.

We started off by searing the seasoned beef (a 10cm diameter piece of centre cut fillet) in a hot pan for around 2 minutes on each side. Then let it rest.

We chopped around 400g of mushrooms and whizzed them up in a food processor until they resembled a paste, but not a slurry.

We fried this paste for around 10 minutes until it had lost most of its moisture. Then we spread this on a plate and set it aside.

Then we chilled the fillet for around 20-30 minutes while we rolled out the pastry.

We used premade puff pastry which we rolled out in a rectangular shape to around the thickness of a £1 coin. Then we brushed some beaten egg yolk all over it.

We let this chill in the fridge for around 20 minutes too.

Meanwhile we laid out 8 overlapping slices of Parma ham on some clingfilm and spread the mushroom paste across them.

Once the meat and pastry had chilled we spread some English mustard over the meat then wrapped the pastry around it tightly in the clingfilm.

We left this to chill for 15 minutes more.

Then we scored the pastry and brushed it again with egg yolk and gave it a quick heat on the hob to crisp up the bottom of the pastry. When we saw it looking a bit bubbly we put it in the oven at 200C for 20 minutes.

We turned the oven down to 180C and cooked for 15 minutes before taking it out and leaving it to rest for 10-15 minutes. The end – phew!

While all of this was happening we cooked our lobster tails. The shells were already cut down the back so we pulled the meat out and over the top, this is called ‘piggybacking’.

Then we broiled the tails in a pan with butter and garlic – constantly spooning the liquid over the top so the white meat would cook.

Once cooked, after 4/5 minutes, we served them with a simple salad and some lovely buttered sunflower and pumpkin seed bread.

So then our attention turned to the star of the show.

The pastry looked golden brown on top but it was impossible to tell if the meat was cooked right or not.

Leaving it to rest without touching it was a struggle but gave us time to finish off the mash, beans and gravy which was a good distraction.

When it was finally time to cut into it, we couldn’t believe our eyes. It looked bang on PERECT! 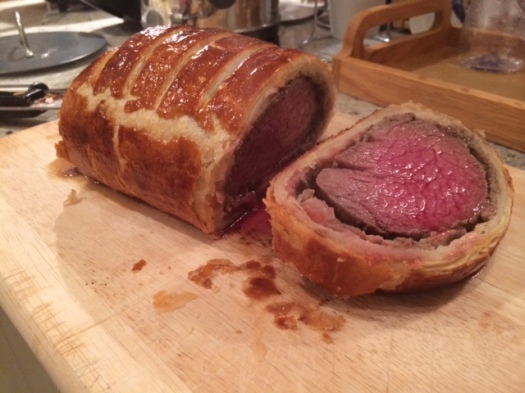 The Wellington above may look like it would serve 4/5 people but I am not ashamed to say that after my two portions and Matt’s THREE (!) there was none left at all!

A good start to 2015 I say. Let’s hope for more kitchen success this year!

One thought on “A Beef Wellington For New Year”