In the week-long 30th birthday binge that was, Matt treated me to dinner at a restaurant we had both wanted to visit for a while.

Berners Tavern is in the Edition Hotel on Berners Street just off Oxford Street and was opened by chef Jason Atherton in 2013.

So yes, we were a bit late to the party, but who cares?!

We were intrigued by the hotel itself so decided to have a drink there first. The bar is in the opulent lobby which is made up of marble, sparkling chandeliers and had a HUGE Christmas tree.

It had a great buzz to it and we found the perfect spot for some people watching. While there was an extensive cocktail list, we chose to start with a glass of champagne which we raised for a birthday toast in the shadow of the tree.

The bar was full of the typical Fitzrovia media types and a fair few others who were definitely there to be seen. What was less impressive was the group of ‘hipsters’ next to us who left without paying for their mojitos!

After our drinks we headed into the main dining room of Berners Tavern which just as stunning as the lobby but in a totally different way. Low lighting, walls covered in paintings in gold frames and a beautiful carved ceiling make for something pretty special.

We weren’t sat at the greatest table to be honest – it was next to the waiters’ tills so we felt like everything we said was being overheard.

But I should say any concerns we had about this were soon forgotten when we looked at the menu.

The menu is full of gorgeous-sounding British fare. I like it when a menu says where the meat or fish is from.

We decided to start with a cocktail I’d already sampled at the Blind Pig above Atherton’s Social Eating House – Dill Or No Dill.

It’s a delicious mix of gin, cucumber, elderflower and lemon juice. Just perfect for cleansing the palate before a good stuffing – or it would have been, except our starters arrived before the drinks…

We usually try to order different dishes so we’re sampling a wider range of food and can taste each other’s but on this occasion we both wanted to start with the lobster and prawn cocktail. 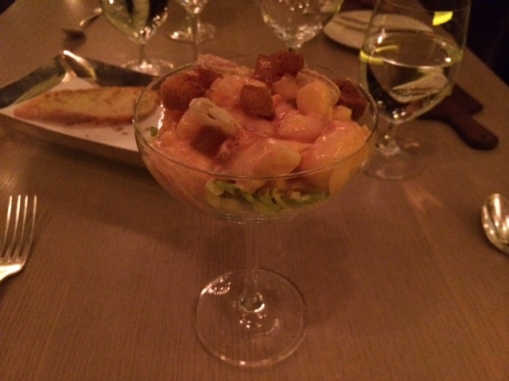 The portions were really generous with huge chunks of juicy lobster and big king prawns. Often there can be too much cocktail sauce but the serving was just right so we could still taste the meat of the shellfish.

Crunchy shallot and avocado gave the dish some extra texture but could not detract from the the stars of the show.

For the main course I chose the cod with a Gruyere and herb crust, gnocchetti, braised leeks and clams and purple sprouting broccoli.

I eat a lot of fish but I’ve never had a dish like this, the flavours; salty, cheesy, fishy (sorry for not making it sound more elegant) all complimented each other perfectly.

Matt ate the roasted rump of lamb, smoked ham hock and white bean ragout and pesto which he described as “amazeballs” – not that helpful I know, but it gives you an idea of what his plate looked like (very shortly) after.

It was cooked to the perfect amount of pinkness and was a vivid, colourful plate of food. I didn’t get a chance to try it so I can’t tell you much more!

It was the 17th December and we were really feeling Christmassy so we went for the dessert which had mulled wine in it.

The citrus posset, clementine jelly, mulled wine granita and gingerbread biscuit came in a small round glass jar which showed off the colourful layers. As it was served, the mulled wine was poured over it which made it go slightly sloppy but the spicy gingerbread kept its crunch.

It was a great festive dessert and really unique – just what I would expect from Atherton.

Berners Tavern is a fantastic dining experience from the room to the food. The only thing we found let it down was that the service was just a bit too efficient.

We had eaten our starters and main courses within an hour and had to ask for a little rest before contemplating a dessert and for some time to enjoy our wine.

But the attention to detail on everything was faultless and the atmosphere and surroundings made for a very memorable evening.